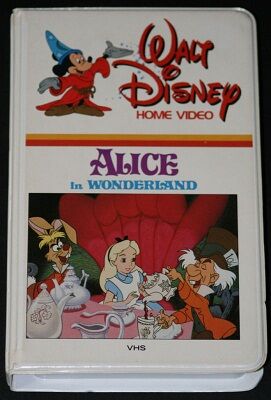 Alice in Wonderland was the third of five Disney animated features released on VHS and Betamax tapes during the early 1980s. Originally released for rental only in 1981, the video was later released for sale in November 1982.

Alice follows the White Rabbit down the rabbit hole into Walt Disney's brilliant concoction of fantasy and music. Here's Lewis Carroll's immortal masterpiece interpreted in wondrous color and ingenious animation. Enjoy once again the many unforgettable characters Alice meets on her extraordinary adventure.

Retrieved from "https://angry-grandpas-media-library.fandom.com/wiki/Alice_in_Wonderland_(1981-1983_VHS)?oldid=51208"
Community content is available under CC-BY-SA unless otherwise noted.