A blue bar with WARNING and the a warning text below.

The warning screen is the same as the A&M warning, but it had a red box with the FBI text and logo is white, different warning text and "WARNING" is larger and it's red.

The warning screen is the same as MCA/Universal Home Video (now Universal Studios Home Entertainment), but different warning text and "FBI WARNING" takes place of "WARNING" and in a different font.

The warnng screen is the same as the Burbank Video warning, but it is in a different font and centered, plus "FBI WARNING" is smaller and different warning text below.

The warning screen is the same as the Feature Films for Families warning.

As seen on later PolyGram and USA Home Entertainment releases.

PolyGram Warning 1986.JPG
Add a photo to this gallery

Warning: On a black background, we see the word "WARNING" in orange, and below is orange warning text.

Warning: On a black background, we see the word "WARNING" in the same font as the 1993 PolyGram logo in white, and below is white warning text.

FX/SFX: The fading of the text. 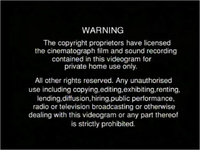 Warning: On a black background, the white text split in two rows in Helvetica with "WARNING" on the top fades in, and after 20 seconds it fades out.

FX/SFX: The fading of the text.

Retrieved from "https://angry-grandpas-media-library.fandom.com/wiki/PolyGram_Video_Warning_Screen?oldid=10318"
Community content is available under CC-BY-SA unless otherwise noted.