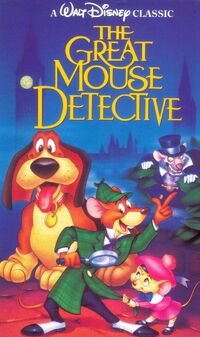 Back in April 1992, Disney planned to use the title "The Adventures of the Great Mouse Detective", until it was re-released in theaters on July 2, 1986, then later on VHS on August 21, 1992 and on CAV Laserdisc have the 1986 Walt Disney Home Video Logo then CLV Laserdisc have the 1989 Walt Disney Classics logo. The Great Mouse Detective was last seen in stores in this format on April 30, 1993.

When a lovable London toymaker is kidnapped, his daughter turns to none other than legendary super-sleuth, Basil of Baker Street, setting the stage for one of Disney's most entertaining and fast paced musical adventures. Basil's jolly assistant, Dr. Dawson, and the loyal dog Toby lend a hand nd a nose as they sniff out clues through a charming miniature world.  The chase leads to the notorious Professor Ratigan (Vincent Price) -- a ruthless rat whom basil must outwit to save all of mousedom! Full of colorful characters and spectacular animation highlighted by a cinematic climb to the top of Big Ben -- it's no secret why you'll love Disney's greatest little mystery in history!

In Other Countries[edit | edit source]

Upon moratorium of the 1992 VHS, The Great Mouse Detective premiered on the Disney Channel on August 1, 1993. It aired through October.

Retrieved from "https://angry-grandpas-media-library.fandom.com/wiki/The_Great_Mouse_Detective_(1992_VHS)?oldid=51269"
Community content is available under CC-BY-SA unless otherwise noted.